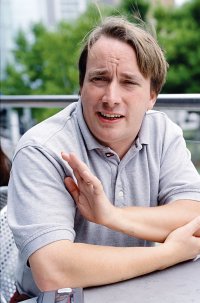 In 1996, Linus Torvalds released Linux 2.0, and we got symmetric multiprocessing (SMP) and we were on our way to Linux supercomputers. In 1999, Linux 2.2 appeared, and Linux made a major move off Intel chip architectures. In 2001, after some delays, Linux 2.4 turned up with great server improvements. And, in 2003, Linux 2.6 showed up, the prototype for modern Linux. So why haven’t we seen a Linux 2.8 or 3.0 in the last few years? I’ll let Torvalds explain:

I decided to just bite the bullet, and call the next version 3.0. It will get released close enough to the 20-year mark, which is excuse enough for me, although honestly, the real reason is just that I can no longer comfortably count as high as 40.

The whole renumbering was discussed at last years Kernel Summit, and there was a plan to take it up this year too. But let’s face it – what’s the point of being in charge if you can’t pick the bike shed color without holding a referendum on it? So I’m just going all alpha-male, and just renumbering it. You’ll like it.

Now, my alpha-maleness sadly does not actually extend to all the scripts and Makefile rules, so the kernel is fighting back, and is calling itself 3.0.0-rc1. We’ll have the usual 6-7 weeks to wrestle it into submission, and get scripts etc cleaned up, and the final release should be just “3.0″. The -stable team can use the third number for their versioning.

So what big exciting changes can we expect from Linux 3.0? Well, Torvalds says it better than I can again, so I’ll let him do the honors:

NOTHING. Absolutely nothing. Sure, we have the usual two thirds driver
changes, and a lot of random fixes, but the point is that 3.0 is *just* about renumbering, we are very much *not* doing a KDE-4 or a Gnome-3 here. No breakage, no special scary new features, nothing at all like that. We’ve been doing time-based releases for many years now, this is in no way about features. If you want an excuse for the renumbering, you really should look at the time-based one (”20 years”) instead.

So no ABI [application binary interface] changes, no API [application programming interface] changes, no magical new features – just steady plodding progress. In addition to the driver changes (and the bulk really is driver updates), we’ve had some nice VFS [virtual file system] cleanups, various VM [virtual machine] fixes, some nice initial ARM consolidation (yay!) and in general this is supposed to be a fairly normal release cycle. The merge window was a few days shorter than usual, but if that ends up meaning a smaller release and a nice stable 3.0 release, that is all good. There’s absolutely no reason to aim for the traditional “.0″ problems that so many projects have.

Indeed, Torvalds wants “only really important fixes” in the Linux 3.0 kernel. And let’s make sure we really make the next release not just an all new shiny number, but a good kernel too.”

That sounds like a plan to me. It’s not that exciting, and it doesn’t come with any hype, it’s just about making an already good system work even better. Sumber: ZDNet