How to Install Audacious 2.4.4 on Ubuntu with PPA

Audacious music player is a fork of Beep Media Player (BMP), which itself forked from XMMS. It looks a lot like Winamp 2.x (and the playlist, song adding functions and so on, are similar to Winamp) but it also comes with a GTK interface.

The clean interface, amazing functionality with lots of plugins and a low memory footprint have helped Audacious become the default music player in Lubuntu 11.04 (replacing Aqualung). Audacious 2.2.4 is available in the WebUpd8 PPA for Ubuntu 10.04, 10.10 and 11.04 – install it using the following commands: 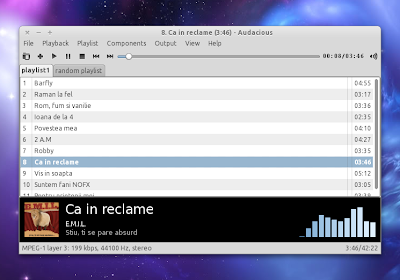