Linux News Today: Ubuntu Touch Lets You Use Alt-Tab on Phones and Tablets

Ubuntu Touch is a Linux distribution, and this becomes all the more obvious when you connect a keyboard to it, and it lets you do Alt-Tab, just like it would happen on a regular desktop, but then again, that’s the whole point.

Canonical’s long-term goal is to have a single operating system that is capable of running on all platforms. This means that sometime in the future, sooner rather than later, we’ll see Ubuntu on tablets, on phones, and on the desktop. They will all look alike, but that’s hardly the most important aspect of this evolution.

One of the most expected features that should become more stable and widely used is the ability to connect to a PC and use the phone / tablet like that. In fact, Mark Shuttleworth, the founder of Canonical, was saying just this a couple of years back. The phones in our pockets have become powerful enough to run a full operating system. Why not take advantage of it?

Alt-Tab on a tablet, what’s the world coming to?

Tablets and phones powered by Android or iOS have changed our perspective on how a device like that should behave, but Canonical is trying to change that. Our devices can do a lot more than just routing calls and providing some limited application use.

The ability you can see in the GIF below is available right now. All you have to do is connect a keyboard to the phone, and you’re all set. Users don’t have to do anything extra, and developers are still working on features that will make any mobile device powered by Ubuntu a potential PC.

There is only one caveat. If that device is a tablet, then you don’t really need to output the video signal, but if you want to do the same thing with a phone, it gets a little bit harder. That phone needs to have some sort of port or docking station that can connect to a monitor, but that’s not a rare feature.

You can also check the entire video made by Popescu Sorin below if you want to get a better idea of what’s coming. 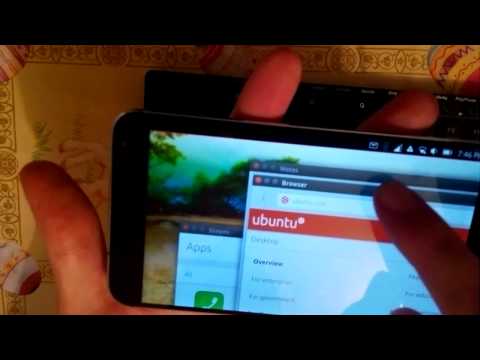