It took him about a month since the release of the Mycroft AI application for the GNOME Shell interface of the GNOME desktop environment, but developer Aditya Mehra managed to get it running on the KDE Plasma 5 desktop as well.

Just a few hours ago, he uploaded the so-called Mycroft-Ai-QtApplication project to his GitHub page, allowing anyone who wants a taste of the Mycroft AI (Artificial Intelligence) platform on their KDE Plasma 5 desktop environments. As its name suggests, the companion app was written entirely in Qt 5.

We promised that we would keep you informed of the development progress, and here we go. Just watch the video below to see the Mycroft AI Qt application in action on a KDE Plasma 5 desktop. There’s not much at the moment, and it still contains bugs, but at least you can install it following the instructions provided by Aditya Mehra a.k.a. AIIX.

When it is stable enough for daily use, the Mycroft AI Qt interface will allow you to interact with the Mycroft AI platform, just like you’ll use the Cortana or Siri assistants on the Microsoft Windows and macOS operating systems. At the end of the article, we’ve also attached the video of the Mycroft AI for GTK/GNOME, created by Christopher Goulet, to see it in action.

If you’re planning on installing the Qt 5 front-end of Mycroft AI on your KDE desktop, please try to keep in mind that you’ll first need to download and install the Mycroft AI Core project (mycroft-core-master needs to be available in your Home directory), as well as to install the Qt5, Qt5Quick 2.0 or higher, Qt5Dbus, Qt5Gui, Qt5Widgets, and Qt5Network packages. Run the assistant by following these instructions. 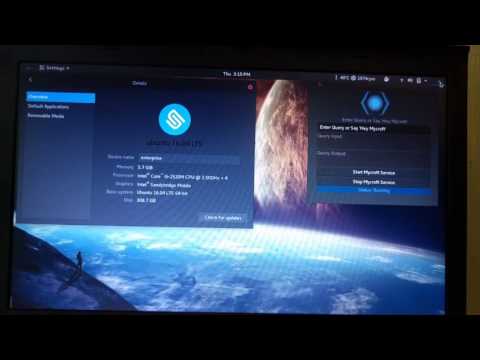