As you may know, today, February 22, was the first day of the MWC (Mobile World Congress) 2016 event, which takes place these days in Barcelona, Spain, on Thursday, February 25.

Canonical is there, of course, to showcase its latest Ubuntu-powered devices, as well as to show the world the progress made for the Ubuntu convergence, a feature that allows users to use Ubuntu Phones and Tablets as personal computers.

We reported the fact that Canonical will have a big presence this year at MWC and that its Ubuntu converged devices will be one of the main attractions there, especially the new BQ Aquaris M10 Ubuntu Edition tablet and Meizu PRO 5 Ubuntu Edition phone.

If you’re reading our website on a daily basis, you would know by now everything there is to know about those two new Ubuntu devices, and if you are at MWC 2016, you cannot pass by the Ubuntu stand without at least taking a look at them.

Below, we’ve posted one of the first hand on review of BQ Aquaris M10 Ubuntu Edition, which is also known as the first Ubuntu Tablet device, courtesy of Xataka, a Spanish technology blog.

Unfortunately, the video review is only addressed to our Spanish-speaking users, but you can still see the BQ Aquaris M10 Ubuntu Edition tablet in action and how it converges into a full-fledged Ubuntu desktop.

Canonical’s road to convergence is long, and what you see in the video below is only the beginning. The Unity 8 user interface will be hugely improved in 2016, and with a little bit of luck, we will have it as a technical preview in the next Ubuntu OS as well.

We’ll now let you enjoy the video review of BQ Aquaris M10 Ubuntu Edition tablet below, and as soon as we find a similar video with the new Meizu PRO 5 Ubuntu Edition smartphone, we will publish a new “Watch” article right here on Softpedia. 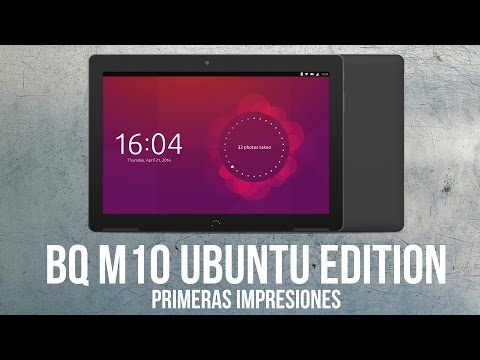